We’ve all had that student. You know the one – he does not want to be in music class, and he does everything he can to demonstrate it. He’s defiant, disruptive, and demands attention. He drains your energy and leaves you wondering if your classroom management skills have gone down the drain. You try everything, and nothing seems to work

Working in an inner-city school, I see a lot of kids like that.  And, yes, I have tried everything. Whole class reward systems. Three strikes you’re out. Threats. Sending the offender to sit in the hall. Nothing seems to work, and if it does, it only works for a short while. It’s hard not to wonder why that one kid is just so…. so…. bad.

But the thing is, he isn’t bad. His behaviour may be undesirable, but he isn’t bad. It’s in these situations that I try to understand things from the child’s perspective. As I only see my students twice a week for 30 minutes, it’s hard to get to really know them and their story. When I am struggling with a particular student, I seek out the homeroom teacher and ask them to fill me in on that child’s story.

I recently had a boy just like this. Let’s call him Derek. Derek came to our school half way through grade 3, and almost instantly had behaviour issues. It wasn’t too much of a problem – nothing that a fast-paced, engaging class couldn’t solve. However, come the following year, Derek’s behaviour was getting worse. We had butted heads a few times. I knew he didn’t like me when his recorder order form was returned with my name scratched out and some rather choice words written in.

I don’t know what made me think of this, but one day, I took him aside after a recorder lesson and said, “Derek, I want you to succeed.”

Those five little words made a world of difference.

I want you to succeed.

The next week, Derek starting showing more effort in class. His behaviour seemed to change overnight! All of a sudden, he was focused, engaged, and not distracting the rest of the class. I couldn’t believe it!

A few weeks later, Derek’s class was ready to do their first recorder tests (I use a system similar to Recorder Karate where students can earn belts). I had been warning the class that I was really tough – you had to score 8 or 9 out of 9 to pass the test! I asked if there were any volunteers that wanted to do their test in front of the entire class (usually, I set up centres and test small groups). Well, guess whose hand shot straight up? Yup. Derek’s. I’m not going to lie – a bit of trepidation set in. I so wanted him to succeed, but I knew that his new found focus could easily be shattered.

Derek played the required piece on his recorder. Not only did he play it, he aced it! A nine out of nine!! I made a huge deal how hardly anyone gets a 9/9 on their first try, and gave him his “belt” to tie to the foot of his recorder. The smile on that child’s face was huge.

Last week was Valentine’s Day, and I happened to have Derek’s class that afternoon. As Derek walked through the door, he said, “Ms. Harris, I have something for you,” and handed me a Valentine’s Day card. I immediately thought back to the nasty names he was calling me a few months ago, and smiled. Those five little words, “I want you to succeed,” were exactly what he needed to hear. He needed to know I was on his side, that I did indeed care for him. 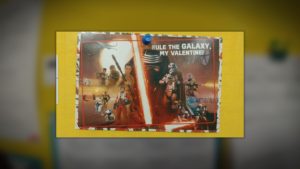 Those little kids with big behaviours? They need to know that we believe in them and want them to succeed.

Do you have a favourite classroom management strategy? Have you had a similar experience with a student? Please share it in the comments!